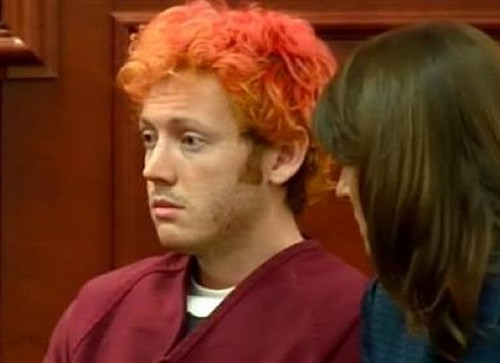 1. James Holmes had no job, was earning unemployment but was able to purchase close to 10k in weapons, explosives, and tactical equipment, and this all happened within 2 months. The chances that Holmes could afford to finance this on his own is highly unlikely. Someone helped finance this attack, follow the money and we will find the masterminds.

2. The testimony of 2 key eye witnesses totally contradicts the official story of there being one shooter, with no accomplice in the attack. One witness testified that the tear gas canisters came from both sides of the theatre, a second witness testified that before the movie began he saw someone sit down in the front row, and shortly after sitting down his phone rang and instead of walking into the main lobby to take the call, he walked over to the emergency exit to the right side of the theatre opened the door and looked to be signaling someone outside the theatre. Shortly after the shooter made entrance through the emergency exit and commenced his attack.

3. Evidence photos - Evidence photos have surfaced of a gas mask outside of the emergency exit of theatre 8, police reported that when they arrested the shooter in the white Hyundai outside of theatre 9 he was wearing a gas mask, that would make 2 gas masks that were recovered. Also photos show the AR-15 propped up against the wall opposite of the fire exit door of theatre 9, police radio communications reported that night that the rifle was found inside the theatre, and even if the the AR-15 was discarded outside the theatre do you think the gunman was going to take the time to set the weapon down ? The Hyundai - why was the window missing? I thought he put up no resistance as he was being taken into custody ?

4. Radio communications from the night of the attack -

*First report of suspects was two men fleeing the theatres both wearing back packs, what happened to these two suspects??

*the majority of injured and witnesses were not given access to ambulances, they were to be transported by other vehicles to the high school. WHY?

*Magazine and AR-15 dropped in theatre

5. Pool of eye witnesses - It was reported that the theatre had over 300 people in it, there have been less than 10 eye witnesses with a only a few taking most of the spotlight ie. Jennifer Seeger. The KEY eye witnesses seem to have very well rehearsed testimony but have not given much sense to whether there testimony is actually plausible - Jennifer Seeger has consistently given a description of the shooter, that miraculously matches James Holmes to a T, even though she has told reporters that she was face down in the aisle, and surrounded by tear gas/gas obstructing her view. Seeger also described the gas canisters down to the colour, personally I believe this was an impossibility in that scenario. She also mentioned that hot shell casings were hitting her in the forehead as the gunman was spraying the theatre, how is this possible? she was on her front was she not? Another point that should be noted is that for a event that involved 300 people, there has been a surprisingly low amount of postings on youtube, facebook, and Twitter. No one who was involved in this event is talking about it, beyond that small group of witnesses that have been talking to national media outlets.

6. Holmes booby trapped apartment - How are we to believe that a 24 yr old, former jewish camp counselor, gaming nerd, science rock star, Neuroscience PHD had the skill set to set up a system of explosive devices and booby traps that would have the FBI bewildered for almost two days?? How are we to believe that ?? There is no way this maze of death was the work of one neuroscience student. It's BS.

8. Anti-gun agenda - Didn't anyone notice how quick public officials were ready to talk to the media about antigun legislation ? Bloomberg publically called out Obama and Romney to do something about the lack of gun control in the US, excellent timing seeing as the UN has legislation on the table to ban small arms globally.

9. The fact that Holmes allegedly bought the guns legally, to me this is the biggest smoking gun that this attack is being used as sounding board for the anti gun/disarmament agenda, think about it...most intelligent people who were planning an attack like this would do everything they could to stay off of the radar, buying the guns legally doesn't allow one to do that. What they are trying to do is demonize the legal gun owner, saying hey Holmes wasn't a criminal he was a normal guy who went crazy, and due to his ability to legally buy these firearms he was able to pull off these attacks.

10. The roomates - The initial reports were than Holmes was living with two other people, but once people started asking who these roommates were, the story had changed to no roommates that he lived by himself. The roommate story had to change because everyone was asking the same thing, if Holmes had roommates where are they ? Are they in the apartment with all of those explosive materials? It makes no sense!!! I don't think there were any explosives in Holmes residence, I think that they were buying time to construct this BS story.