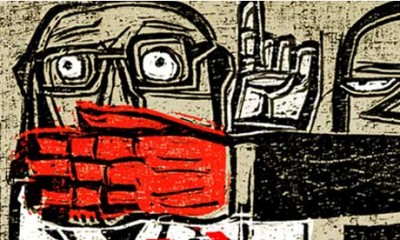 It’s Never to Protect Us From Bad Guys

No matter which government conducts mass surveillance, they also do it to crush dissent, and then give a false rationale for why they’re doing it.

While the Fourth Amendment [of the U.S. Constitution] was most immediately the product of contemporary revulsion against a regime of writs of assistance, its roots go far deeper. Its adoption in the Constitution of this new Nation reflected the culmination in England a few years earlier of a struggle against oppression which had endured for centuries. The story of that struggle has been fully chronicled in the pages of this Court’s reports, and it would be a needless exercise in pedantry to review again the detailed history of the use of general warrants as instruments of oppression from the time of the Tudors, through the Star Chamber, the Long Parliament, the Restoration, and beyond.

What is significant to note is that this history is largely a history of conflict between the Crown and the press. It was in enforcing the laws licensing the publication of literature and, later, in prosecutions for seditious libel, that general warrants were systematically used in the sixteenth, seventeenth, and eighteenth centuries. In Tudor England, officers of the Crown were given roving commissions to search where they pleased in order to suppress and destroy the literature of dissent, both Catholic and Puritan. In later years, warrants were sometimes more specific in content, but they typically authorized of all persons connected of the premises of all persons connected with the publication of a particular libel, or the arrest and seizure of all the papers of a named person thought to be connected with a libel.

By “libel”, the court is referring to a critique of the British government  which the King or his ministers didn’t like … they would label such criticism “libel” and then seize all of the author’s papers.

The use by government of the power of search and seizure as an adjunct to a system for the suppression of objectionable publications … was a principal instrument for the enforcement of the Tudor licensing system. The Stationers’ Company was incorporated in 1557 to help implement that system, and was empowered

“to make search whenever it shall please them in any place, shop, house, chamber, or building or any printer, binder or bookseller whatever within our kingdom of England or the dominions of the same of or for any books or things printed, or to be printed, and to seize, take hold, burn, or turn to the proper use of the aforesaid community, all and several those books and things which are or shall be printed contrary to the form of any statute, act, or proclamation, made or to be made. . . .

An order of counsel confirmed and expanded the Company’s power in 1566,  and the Star Chamber reaffirmed it in 1586 by a decree

“That it shall be lawful for the wardens of the said Company for the time being or any two of the said Company thereto deputed by the said wardens, to make search in all workhouses, shops, warehouses of printers, booksellers, bookbinders, or where they shall have reasonable cause of suspicion, and all books [etc.] . . . contrary to . . . these present ordinances to stay and take to her Majesty’s use. . . . ”

Books thus seized were taken to Stationers’ Hall where they were inspected by ecclesiastical officers, who decided whether they should be burnt. These powers were exercised under the Tudor censorship to suppress both Catholic and Puritan dissenting literature.

Each succeeding regime during turbulent Seventeenth Century England used the search and seizure power to suppress publications. James I commissioned the ecclesiastical judges comprising the Court of High Commission

“to enquire and search for . . . all heretical, schismatical and seditious books, libels, and writings, and all other books, pamphlets and portraitures offensive to the state or set forth without sufficient and lawful authority in that behalf, . . . and the same books [etc.] and their printing presses themselves likewise to seize and so to order and dispose of them . . . as they may not after serve or be employed for any such unlawful use. . . .”

The Star Chamber decree of 1637, reenacting the requirement that all books be licensed, continued the broad powers of the Stationers’ Company to enforce the licensing laws.  During the political overturn of the 1640′s, Parliament on several occasions asserted the necessity of a broad search and seizure power to control printing. Thus, an order of 1648 gave power to the searchers

“to search in any house or place where there is just cause of suspicion that Presses are kept and employed in the printing of Scandalous and lying Pamphlets, . . . [and] to seize such scandalous and lying pamphlets as they find upon search. . . .”

The Restoration brought a new licensing act in 1662. Under its authority, “messengers of the press” operated under the secretaries of state, who issued executive warrants for the seizure of persons and papers. These warrants, while sometimes specific in content, often gave the most general discretionary authority. For example, a warrant to Roger L’Estrange, the Surveyor of the Press, empowered him to “seize all seditious books and libels and to apprehend the authors, contrivers, printers, publishers, and dispersers of them,” and to

“search any house, shop, printing room, chamber, warehouse, etc. for seditious, scandalous or unlicensed pictures, books, or papers, to bring away or deface the same, and the letter press, taking away all the copies. . . .]”

Although increasingly attacked, the licensing system was continued in effect for a time even after the Revolution of 1688, and executive warrants continued to issue for the search for and seizure of offending books. The Stationers’ Company was also ordered

“to make often and diligent searches in all such places you or any of you shall know or have any probable reason to suspect, and to seize all unlicensed, scandalous books and pamphlets. . . .”

And even when the device of prosecution for seditious libel replaced licensing as the principal governmental control of the press,  it too was enforced with the aid of general warrants — authorizing either the arrest of all persons connected with the publication of a particular libel and the search of their premises or the seizure of all the papers of a named person alleged to be connected with the publication of a libel.

The New York Review of Books notes that the American government did not start to conduct mass surveillance against the American people until long after the Revolutionary War ended … but once started, the purpose was to crush dissent:

In the United States, political spying by the federal government began in the early part of the twentieth century, with the creation of the Bureau of Investigation in the Department of Justice on July 1, 1908. In more than one sense, the new agency was a descendant of the surveillance practices developed in France a century earlier, since it was initiated by US Attorney General Charles Joseph Bonaparte, a great nephew of Napoleon Bonaparte, who created it during a Congressional recess. Its establishment was denounced by Congressman Walter Smith of Iowa, who argued that “No general system of spying upon and espionage of the people, such as has prevailed in Russia, in France under the Empire, and at one time in Ireland, should be allowed to grow up.”

Nonetheless, the new Bureau became deeply engaged in political surveillance during World War I when federal authorities sought to gather information on those opposing American entry into the war and those opposing the draft. As a result of this surveillance, many hundreds of people were prosecuted under the 1917 Espionage Act and the 1918 Sedition Act for the peaceful expression of opinion about the war and the draft.

But it was during the Vietnam War that political surveillance in the United States reached its peak. Under Presidents Lyndon Johnson and, to an even greater extent, Richard Nixon, there was a systematic effort by various agencies, including the United States Army, to gather information on those involved in anti-war protests. Millions of Americans took part in such protests and the federal government—as well as many state and local agencies—gathered enormous amounts of information on them. Here are just three of the numerous examples of political surveillance in that era:

The National Security Agency was involved in the domestic political surveillance of that era as well. Decades before the Internet, under the direction of President Nixon, the NSA made arrangements with the major communications firms of the time such as RCA Global and Western Union to obtain copies of telegrams. When the matter came before the courts, the Nixon Administration argued that the president had inherent authority to protect the country against subversion. In a unanimous decision in 1972, however, the US Supreme Court rejected the claim that the president had the authority to disregard the requirement of the Fourth Amendment for a judicial warrant.

Much of the political surveillance of the 1960s and the 1970s and of the period going back to World War I consisted in efforts to identifyorganizations that were critical of government policies, or that were proponents of various causes the government didn’t like, and to gather information on their adherents. It was not always clear how this information was used. As best it is possible to establish, the main use was to block some of those who were identified with certain causes from obtaining public employment or some kinds of private employment. Those who were victimized in this way rarely discovered the reason they had been excluded.

Efforts to protect civil liberties during that era eventually led to the destruction of many of these records, sometimes after those whose activities were monitored were given an opportunity to examine them. In many cases, this prevented surveillance records from being used to harm those who were spied on. Yet great vigilance by organizations such as the ACLU and the Center for Constitutional Rights, which brought a large number of court cases challenging political surveillance, was required to safeguard rights. The collection of data concerning the activities of US citizens did not take place for benign purposes.