The United States' Federal Bureau of Investigation (FBI) claims to have thwarted their own "drone" bomb, in yet another farcical case of entrapment and fear mongering aimed not at ending the "War on Terror" but perpetuating the mythological, unending conflict. FBI agents apparently strung along another subpar malcontent by providing him with materials, including a model airplane, real C4 explosives, and small arms. Rezwan Ferdaus, 26, was approached by undercover FBI agents and tasked first with building remote detonation devices he was told would be used in Iraq against US troops. FBI agents went as far as falsely telling Ferdaus that one of his devices had killed 3 US troops. The grand finale was assisting Ferdaus in a spectacular, Hollywood-style attack we are told by FBI agents, would have involve simultaneous assaults on both the US Capitol and the Pentagon involving drone bombs and multiple gunmen. 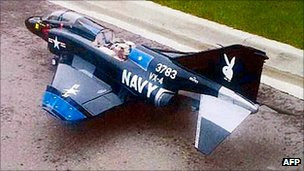 Photo: Your FBI at work - sneaking around the United States, constructing drones made of toy planes like the one above, building bombs, handing out weapons and live explosives to prospective "terrorists" then stopping them "just in time" for sensational headlines to get Americans wringing their hands in fear from what Media Monarchy calls, "terronoia."
....

According to an AFP report, FBI special agent Richard DesLauriers claimed the sting operation proved ''a committed individual, even one with no direct connections to, or formal training from, an international terrorist organisation, can pose a serious danger to the community.'' DesLauriers fails to explain where, if not from the FBI or other federal agencies, Ferdaus could have acquired C4 explosives for his alleged plot. Additionally, DesLauriers fails to explain how Ferdaus can be considered acting as an "individual" with no "direct connections" to an international terrorist organization, when FBI agents were posing as just that, supplying him with motivation, supplies, explosives, logistics, and weapons.

Biggest Supporters of Foreign Terror Organizations is the US Government

Indeed the Libyan Islamic Fighting Group (LIFG) is literally leading the NATO-backed rebellion in Libya, and verifiably committing horrific war crimes, atrocities, and indisputable genocide against the Libyan people. In one city, Tawarga, its 10,000 residents were either massacred, exiled, or imprisoned by rebel forces under NATO cover and their property indefinitely seized, reports the London Telegraph. LIFG's leader, Abdul Belhaj, unlike the FBI's patsy Rezwan Ferdaus, has really killed American soldiers in Afghanistan while members of his LIFG terror organization likewise killed US troops in Iraq. He is now the "council leader" in Tripoli, side by side the newly re-opened US Embassy.

US policy makers, after admitting MEK, another US-backed terror organization, has the blood of US soldiers and civilians on its hands and that it has "undeniably" conducted terrorist attacks, shockingly wants to remove it from the US foreign terrorist organization list so that it can be worked with more closely in toppling the Iranian government. This is revealed in the Brookings Institution's "Which Path to Persia?" report.

"Potential Ethnic Proxies," page 117-118 (page 130-131 of the PDF): "Perhaps the most prominent (and certainly the most controversial) opposition group that has attracted attention as a potential U.S. proxy is the NCRI (National Council of Resistance of Iran), the political movement established by the MEK (Mujahedin-e Khalq). Critics believe the group to be undemocratic and unpopular, and indeed anti-American.

In contrast, the group’s champions contend that the movement’s long-standing opposition to the Iranian regime and record of successful attacks on and intelligence-gathering operations against the regime make it worthy of U.S. support. They also argue that the group is no longer anti-American and question the merit of earlier accusations. Raymond Tanter, one of the group’s supporters in the United States, contends that the MEK and the NCRI are allies for regime change in Tehran and also act as a useful proxy for gathering intelligence. The MEK’s greatest intelligence coup was the provision of intelligence in 2002 that led to the discovery of a secret site in Iran for enriching uranium.
Despite its defenders’ claims, the MEK remains on the U.S. government list of foreign terrorist organizations. In the 1970s, the group killed three U.S. officers and three civilian contractors in Iran. During the 1979-1980 hostage crisis, the group praised the decision to take America hostages and Elaine Sciolino reported that while group leaders publicly condemned the 9/11 attacks, within the group celebrations were widespread.

Undeniably, the group has conducted terrorist attacks—often excused by the MEK’s advocates because they are directed against the Iranian government. For example, in 1981, the group bombed the headquarters of the Islamic Republic Party, which was then the clerical leadership’s main political organization, killing an estimated 70 senior officials. More recently, the group has claimed credit for over a dozen mortar attacks, assassinations, and other assaults on Iranian civilian and military targets between 1998 and 2001. At the very least, to work more closely with the group (at least in an overt manner), Washington would need to remove it from the list of foreign terrorist organizations."

It turns out that MEK is already receiving US funding, weapons, and other assistance to conduct a militant campaign against the government of Iran. This was revealed in Seymour Hersh's New Yorker article "Preparing the Battlefield," which stated:

"The M.E.K. has been on the State Department’s terrorist list for more than a decade, yet in recent years the group has received arms and intelligence, directly or indirectly, from the United States. Some of the newly authorized covert funds, the Pentagon consultant told me, may well end up in M.E.K. coffers. “The new task force will work with the M.E.K. The Administration is desperate for results.” He added, “The M.E.K. has no C.P.A. auditing the books, and its leaders are thought to have been lining their pockets for years. If people only knew what the M.E.K. is getting, and how much is going to its bank accounts—and yet it is almost useless for the purposes the Administration intends.”

Compared with the FBI's sting operations, where only the illusion of terror is conjured, the United States government is literally propping up entire, very real terror networks worldwide, and in Libya's case, handing confessed terrorists an entire nation to lord over.

FBI Has a Long History of Enabling Terrorist Plots

Also worth noting is that this latest PR stunt by the FBI represents a long string of similar operations where entrapped individuals are literally brought up to the moment of pulling the trigger before being "foiled." In 1993, such an operation "accidentally" went live, when FBI agents supplied would-be World Trade Center bombers with real explosives and a fully functioning bomb. The detonation resulted in 6 deaths and over 1,000 injured, and was only deemed an "accident" when FBI informant, former Egyptian army officer Emad Salem, revealed recordings he made of his conversations with the FBI agents. He became suspicious of their motives and feared for his own safety upon realizing real explosives were being used. The recordings were published by the New York Times.

A similar operation was covered in depth in November 2010, in Portland Oregon where the city refused to join the FBI's Joint Terrorist Task Force (JTTF). The FBI then went behind the city mayor's back to conduct a "sting operation" that resulted in their target-suspect delivering a van containing a device the FBI constructed for him to a crowded public square, after which he attempted to detonate the device remotely before being arrested. The news came as a shock, designed by the FBI to embarrass and extort the mayor to rectify his decision to remain out of the JTTF. Unfortunately, Portland caved in to the FBI's pressure and eventually joined the JTTF in April, 2011. In other words, the FBI literally terrorized the people of Portland to accept their federal program.

While some agents at the FBI may believe what they've done is for the greater good, the reality is that the entire "War on Terror" is nothing more than a magnified example the FBI's dubious operation in Portland, representing criminal extortion on a massive scale. The corporate-finanicer elite of Wall Street and London, in conjunction with the intelligence community has carried out both real, and "foiled-just-in-time" attacks to increase their power over Western populations while justifying military encroachment in foreign nations. It is essentially modern day "problem, reaction, solution" imperialism and it is time we recognize the United State government as the chief global sponsor of terrorism. From Libya, to Iran, from Portland to Boston, it is alarmingly clear that the "terror threat" we face would not exist without the constant shepherding of dubious, nefarious organizations with equally doubtful mission statements within our federal government.

At least two foreign terror organizations listed by the US State Department, LIFG in Libya, and Mujahedin-e Khalq (MEK) of Iraq/Iran, both have American blood on their hands, and are both verified to be currently receiving US military and financial aid to carry out, in Libya's case, full scale war, and in Iran's case, terrorism against the Iranian people. To learn more about US state sponsored terrorism, please see, "The War on Terror is a Fraud."