Bullying and the Lil' Psychopath Learning Its Trade 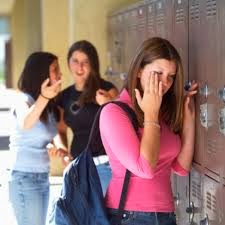 Female Psychopaths Live in a World of Bullying Other Women.
One of the most common misconceptions relating to the psychopath—I have heard from some of the more absurd New Age types—is that deep down, psychopaths are filled with self-loathing and they project their inner hatred of themselves onto their victims. Nothing could be further from the truth! To imply this is to suggest that psychopaths are somehow self-reflective. What is being classified as self-loathing is in reality more akin to resentment and jealousy. Perhaps other disordered individuals might partake in this projection, such as Erotomanics (or 'Bunny Boilers' to use a popular term for the condition), but not psychopaths. Like everything else with the psychopath: it's 'just business'.
Psychopaths do not feel inferior to other people who enjoy relationships, social life, careers and material goods—they just want to take these things away from the victims for the sake of a sick game of one-upmanship, destroying another person’s life for a brief rush of energy. This resentment is most commonly seen when psychopaths bully other adults. They start this in school and they continue to do this for the rest of their lives.
Bullying pays off for the psychopath on many levels towards their social and employment ambitions. Although a psychopath will implement a smear campaign against another person at work or in an organisation in order to take over that person’s position the underlying thrust is that it is the position the victim holds that the psychopath finds desirable. If it leads to the bullied victim resigning, transferring to another department or even killing themselves (murder-by-suicide) then so be it.
Neuroscientists have established that the human brain continues to grow and change long after the rapid developmental stage of early childhood. It is now well-established that people who have been bullied as children by a psychopathic parent or student at school, or as an adult at work — are much more likely to be depressed, anxious, and suicidal. The psychological torment that victims of bullying experience is emotionally ravaging and visceral. Bullying has now been shown to leave a lasting effect on a young person at a time when their brain is still developing, actually leading to reduced electrical connectivity within the brain, as well as destroying the growth of new neurons.
This very real neurological damage is identical to what is seen in those who have been physically and sexually abused in childhood. A paper by the neuroscientist Martin Teicher in the July 2010 edition of the American Journal of Psychiatry outlined a study of the effects on children being verbally abused by adults and their peers and presented some unsurprising data giving scientific legitimacy to what victims of bullies have long known. In his study of more than 1,000 young people, he discovered that words were indeed as hurtful as ‘sticks and stones’. Teicher’s participants varied in how much taunting, ridicule, criticism, shouting, and bad language they had been subject to in the past, but what was revealed was that victims of bullying had higher incidences of depression, anxiety, and other psychiatric disorders than the subjects who had not experienced bullying. Those subjects who reported having been bullied by their peers had observable abnormalities in a part of the brain known as the corpus callosum, connecting the right and left  hemispheres of the brain, vital for visual processing, and (very significantly, from a psychopathic standpoint) clarity of memory.
Victims of psychopathic relationships always have trouble recalling memories from the time their relationship with the psychopath commenced. Psychopaths will oft en say to their victims. ‘Do you recall when you said this…?’ and so forth, and the victim will oft en reply that they have no memory of doing and saying certain things which the psychopath claimed they did indeed do and say. The victims’ memories are impaired. Th is allows the psychopath to invent a fake past event which the victim cannot readily dispute. Th is is why it is very common for psychopaths to target people who were victims of childhood abuse and bullying. In another study, Tracy Vaillancourt, a psychologist at the University of Ottawa, discovered that being bullied as a child can alter levels of cortisol, a hormone produced during times of stress. Vaillancourt’s findings showed that boys who have been bullied have higher levels of cortisol than normal, while bullied girls have abnormally low levels. This weakens the victim’s immune system.