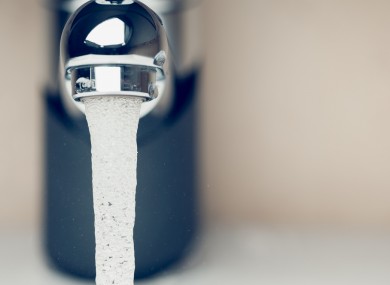 The motion was passed by 22 votes.

It was proposed by Sinn Féin Cllr Anthony Connaughan. Following the meeting, he said on Facebook: 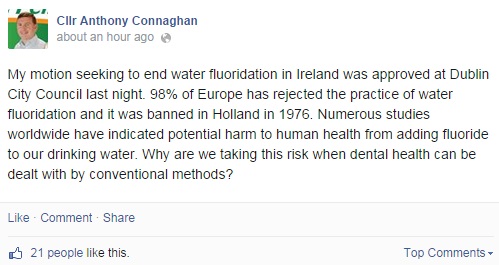 There was much talk of the vote on social media, with the topic trending in Dublin on Twitter:

Speaking to TheJournal.ie, Cllr Connaughan said that the aim of the motion was to put pressure on the government.

The motion called for fluoride or any derivative to be removed from the Irish water supply, and to make it a crime for anyone to put it into the water supply, said Connaughan.

He added that Ireland is only one of eight countries in the world that fluoridates its water.

“There’s a lot of questions to be answered,” he said. “My argument is it’s universal medication, it’s one size fits all, but even the World Health Organisation, which recommends fluoride, recommends it – but only where intake of fluoride is known.”

He argued it would be impossible to know exactly how much fluoride each individual in Ireland uses.

Saying there are “conflicting reports” about the issue, he said that “even our own government should be looking into it more” and that for him, removing fluoride is “in the interest of safety and erring on the side of safety”.

Voting against the motion

One of the councillors who voted against the motion, Fianna Fáil’s David Costello, said that he is a medical scientist and that the argument he put forward on the issue was based on scientific research.

He said he was approached by an anti-fluoride campaigner and then went and did some research on the issue.

Costello said in the literature that he read, “there was clear evidence to suggest there was no negative effects in relation to adding fluoride to the water supply”.

He described anti-fluoride campaigning as “scaremongering” and said the addition of fluoride to water was a cost-effective way of preventing dental cavities.

Costello has proposed the following motion to be discussed at the next City Council meeting:

“That the Chief Executive and City Council recognises the importance of water fluoridation as a necessity for maintaining dental health in our city and that scientific and medical expert opinion be presented to DCC prior to any vote on the issue. There is solid scientific evidence to support the fact that fluoridation is a safe, cost effective and most importantly effective way of reducing dental decay in our children.”

Cllr Mannix Flynn, who abstained from voting, said the result was a “foregone conclusion” but that it didn’t mean that the council will be removing fluoride from the water supply tomorrow morning.

He said he would support the removal of fluoride on a trial basis as he believes there are strong arguments on both sides.

Cllr Flynn said that this is a public health issue, particularly for people who are on the poverty line and children who are vulnerable.

But he said he was slightly disappointed with the discussion last night as he felt some of it “boiled down to a ridiculous argument from left and right”.

He added he would also like to see scientific statements put out from councils in relation to fluoride.

Dr Paddy Smyth of Fine Gael said that he voted against the motion, describing the debate as “an affront to science”. He also said that “where there is no debate when it comes to fluoride is the fact it disproportionately benefits children from lower socio-economic groups”.