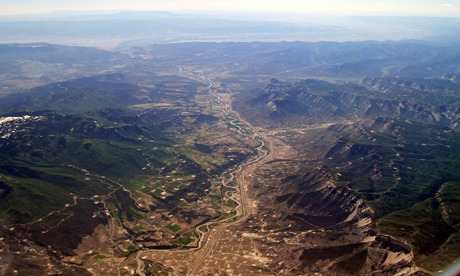 An aerial photograph shows a large field of fracking sites in a north-western Colorado valley. It can take millions of gallons of fresh water to frack a single well. Photograph: Susan Heller/Getty images

America's oil and gas rush is depleting water supplies in the driest and most drought-prone areas of the country, from Texas to California, new research has found.

Of the nearly 40,000 oil and gas wells drilled since 2011, three-quarters were located in areas where water is scarce, and 55% were in areas experiencing drought, the report by the Ceres investor network found.

"Hydraulic fracturing is increasing competitive pressures for water in some of the country's most water-stressed and drought-ridden regions," said Mindy Lubber, president of the Ceres green investors' network.

Without new tougher regulations on water use, she warned industry could be on a "collision course" with other water users.

"It's a wake-up call," said Prof James Famiglietti, a hydrologist at the University of California, Irvine. "We understand as a country that we need more energy but it is time to have a conversation about what impacts there are, and do our best to try to minimise any damage."

It can take millions of gallons of fresh water to frack a single well, and much of the drilling is tightly concentrated in areas where water is in chronically short supply, or where there have been multi-year droughts.

Half of the 97bn gallons of water was used to frack wells in Texas, which has experienced severe drought for years – and where production is expected to double over the next five years. 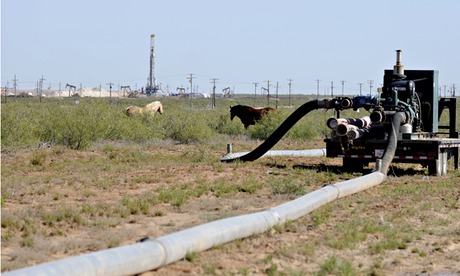 Farming and cities are still the biggest users of water, the report found. But it warned the added demand for fracking in the Eagle Ford, at the heart of the Texas oil and gas rush, was hitting small, rural communities hard.

"Shale producers are having significant impacts at the county level, especially in smaller rural counties with limited water infrastructure capacity," the report said. "With water use requirements for shale producers in the Eagle Ford already high and expected to double in the coming 10 years, these rural counties can expect severe water stress challenges in the years ahead."

Local aquifer levels in the Eagle Ford formation have dropped by up to 300ft over the last few years.

A number of small communities in Texas oil and gas country have already run out of water or are in danger of running out of water in days, pushed to the brink by a combination of drought and high demand for water for fracking.

Twenty-nine communities across Texas could run out of water in 90 days, according to the Texas commission on environmental quality. Many reservoirs in west Texas are at only 25% capacity.

Nearly all of the wells in Colorado (97%) were located in areas where most of the ground and surface water is already stretched between farming and cities, the report said. It said water demand for fracking in the state was expected to double to 6bn gallons by 2015 – or about twice as much as the entire city of Boulder uses in a year.

In California, where a drought emergency was declared last month, 96% of new oil and gas wells were located in areas where there was already fierce competition for water.

The pattern holds for other regions caught up in the oil and gas rush. Most of the wells in New Mexico, Utah and Wyoming were also located in areas of high water stress, the report said. 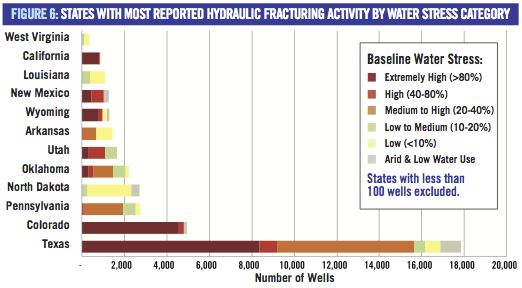 Source: Ceres Some oil and gas producers were beginning to recycle water, especially in the Marcellus shale in Pennsylvania, the report said. But it said those savings were too little to offset the huge demand for water for fracking in the coming years.