In the wake of the Houla massacre in Syria, and evidence exposing the West's initial narrative of Syrian troops "shelling to death" around 100 people to be categorically false, people are struggling to understand just what happened. The Guardian has chosen to post unverified witness accounts produced by the Free Syrian Army, seemingly custom tailored to refute evidence brought by Russia to the UN Security Council. The BBC has admitted that only "most" of the accounts they've received implicated what they "believe" were Syrian troops, or pro-government militias - and by doing so, imply that some did not and have told a different account.

As the window of opportunity closes for the West to exploit the bloodshed at Houla, the Western media is increasingly backpedaling, retracting, and being caught in a crossfire of their own lies and propagandizing. BBC was caught initially using years' old photos from Iraq for their Houla coverage, while papers and networks across the board have had to adjust their narratives entirely as each new piece of verified evidence emerges.

What is known is that Syrian troops were engaged with armed militants of the "Free Syrian Army" (FSA) in and around Houla. Syrian troops, as they have been doing throughout the conflict, were using artillery and tanks to target heavily fortified rebel positions from a distance. During or shortly after this exchange, militants began entering homes and killing families with knives and small arms fire. The FSA and Syrian opposition claim the militants were pro-government militias while the government claims they were foreign-backed Al Qaeda terrorists, known to be operating throughout the country. What they weren't, by all accounts, were Syrian troops.

A recent "editorial" out of the Globe and Mail claims that Russia's position that opposition forces were involved in the massacre is "laughable." However, this is divorced from not only reality, but also from a complete understanding of modern 4th generation warfare. From Venezuela to Thailand, Western backed opposition groups have triggered unrest and used it as cover to pick off members of their own movement, to then blame on the targeted government and compound any given conflict until a critical mass is reached, and a targeted government is toppled..

Wall Street-backed former-Thai Prime Minsiter Thaksin Shinawatra, a close associate of the Bush family with connections ranging from before, during, and after his term in office, was ousted from power in 2006 by nationalist forces for abuses of power. Thaksin had worked as a Carlyle Group adviser, sent Thai troops to aid in Bush's invasion of Iraq, attempted to implement a free trade agreement with Wall Street's Fortune 500 without parliamentary approval, hosted CIA torture facilities, and prosecuted a "war on drugs" that saw some 2,500 Thais extra-legally executed in the streets, most of whom were later determined to have nothing to do with the drug trade.

Since his ousting in 2006, he has received support from a myriad of prominent US lobbying firms including fellow Carlyle member James Baker and Baker Botts, Bush administration warmonger Robert Blackwill of Barbour Griffith & Rogers, and Neo-Conservative PNAC signatory Kenneth Adelman of Edelman.

With this backing, Thaksin has led an increasingly violent bid to return to power through a "red" color revolution constituting of a large political machine operating in Thailand's northeast provinces and a personality cult called the United Front for Democracy Against Dictatorship (UDD).

In April of 2010, Thaksin mobilized thousands of UDD members to paralyze Thailand's capital of Bangkok in retaliation to a court seizure of billions of his ill-gotten assets. On the night of April 10, 2010, when riot troops moved in to disperse the protesters, militants clad in black opened fire on Thai troops.

"As the army attempted to move on the camp, they were confronted by well-armed men who fired M16 and AK-47 assault rifles at them, particularly at the Khok Wua intersection on Rajdamnoen Road. They also fired grenades from M79s and threw M67 hand grenades at the soldiers. News footage and videos taken by protesters and tourists show several soldiers lying unconscious and bleeding on the ground, as well as armed men operating with a high degree of coordination and military skills."

HRW, an otherwise dubious organization, only conceded to this a full year after the events unfolded and only in the face of irrefutable photographic and video evidence captured and broadcasted by both professional and amateurs local and foreign journalists. This included videos and photos of militants armed with both AK-47's and M-16's. Previously, Thaksin's Western backers and his opposition leaders had tried to blame all deaths resulting from the M-16's 5.56mm rounds squarely on the Thai military, including the high-profile death of Reuters cameraman Hiro Muramoto. With proof that opposition militants were also firing 5.56mm rounds, this political leverage was negated.


However, the most chilling aspect of the April 10, 2010 violence was an incident involving the premeditated murder of a pro-Thaksin protester by Thaksin's own mercenaries - recorded on tape and extensively photographed, then shamelessly and relentlessly used as propaganda to this very day. The incident took place on April 10, 2010, the same night Reuters cameraman Hiro Muramoto was killed, and gives us immense insight into how Western-backed unrest will take advantage of chaos it itself creates to then purposefully kill both protesters and government troops to escalate tensions and violence while undermining the legitimacy of a targeted government.

In a YouTube video (WARNING: EXTREMELY GRAPHIC) recorded by Thaksin propagandists, protesters can be seen facing off against troops to the left of the screen with other protesters seeking cover as fire is exchanged between militants and troops. In the center of the frame, a very conspicuous man is seen carrying a tall red flag with his attention fixated on men directing him into position. He moves in steps, almost as if posing for a picture with his attention focused on the men directing him. Behind him, with his hat turned backwards, appears to be a spotter shadowing the flagman's moves and flashing a series of hand signals to the men on the left directing the flagman. 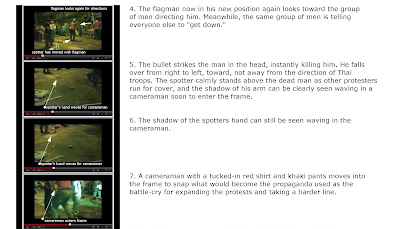 Images: Frames taken from the video with annotations describe the events that unfolded shortly before and directly after Thaksin mercenaries intentionally killed one of their own protesters. The final image eventually made it onto the cover of Thaksin propaganda magazine, "Voice of Taksin." (click images to enlarge)

Men in the upper left of the screen can be seen waving the flagman into position as they tell other protesters to "get down" before a shot is fired taking off the top of the man's skull. As protesters panic and run off camera, the spotter moving with the flagman calmly stands above the dead man and waves in a photographer who takes the infamous pictures that would soon be featured on the cover of Thaksin's propaganda publication, the "Voice of Taksin." It must be remembered that the video camera was fixated on this otherwise insignificant flagman the entire time leading up to the gruesome event, to specifically capture the entire, premeditated murder. 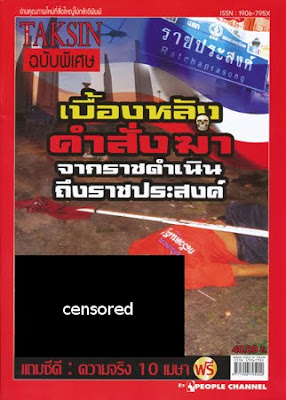 Image: A censored version of the very explicit "special" cover of Thaksin propaganda magazine, "Voice of Taksin," featuring a man killed not even a minute ago. The flag he was conspicuously waving just moments before lays across his chest and was most likely handed to him to aid mercenary snipers in targeting him. The original cover with translations can be found here. (WARNING: EXTREMELY GRAPHIC.) The editor of "Voice of Taksin" has since been arrested and imprisoned for his role in the 2010 violence - however Western "human rights" fronts including US-funded Prachatai maintain that he is a "political prisoner" and a "human rights activist." Note: on the bottom of the magazine cover a "free" CD is offered featuring video of the gruesome staged murder of this unfortunate man.

This horrific, cold-blooded demonstration of the callous, murderous nature of these so-called "pro-democracy" movements sowing chaos from Tunisia to Thailand, and certainly including Syria, illustrates the full depths of depravity from which the global elite and their proxies operate. Behind the thin veneer of revolutionary "singing tomorrows" is a heartless, craven killing machine as eager to dispose of its most adamant supporters as it is inclined to eliminate its most reviled opponents. What was just described has played out not only repeatedly in Thailand, but all across North Africa and the Middle East as well as during previous attempts by the West to oust Hugo Chavez in Venezuela.

The Free Syrian Army has been regularly engaging in armed combat with government troops and now more than ever, are better equipped with communication equipment, weapons, cash and logistical support from the West and the Gulf States. Just as Thaksin's gunmen were able to draw Thai troops into a conflict used as cover to commit manufactured atrocities to be used as propaganda against the Thai government, militants in Syria have already demonstratively employed similar tactics. In 2011, "mystery gunmen" would regularly start firefights during protest rallies identical to the one in Bangkok, firing on both Syrian troops and protesters, with both sides describing elusive "rooftop snipers."

Houla appears to simply be on a much larger scale, involving militants most likely not affiliated with local FSA fighters or the Syrian government, but foreign elements just as the Syrian government has claimed. Just as in Bangkok where protesters were taken as much by surprise as Thai troops at the arrival of Thaksin's militants, FSA fighters, Houla residents, and Syrian troops all seem baffled as to who exactly committed the atrocities.

And amongst all the finger pointing, it is the politically-motivated haste by the US, UK, France, Israel, and the Muslim Brotherhood to condemn the massacre, baselessly blame the Syrian government, and cry in unison for military intervention that is by far the most incriminating evidence yet as to who was really behind the bloodbath. Cui Bono? To whose benefit? NATO and its Middle Eastern proxies have made it abundantly clear it was to their benefit.

Clearly there is the distinct possibility that a third party took advantage of a prolonged engagement between the FSA and government troops in Houla, to manufacture a very real atrocity. With so few facts in hand, it would be the height of irresponsibility to lay blame on anyone so squarely that punitive actions are leveled.  So while the Globe and Mail berates Russia for suggesting that "the blame must be determined objectively," it is by far, without debate, the most sensible course of action to take. If the West laments the distrust it now suffers, it has only itself, and its long history of running death squads in exactly this manner, to blame. ﻿