It's Not Just the Stock Market That's Rigged: the Entire Status Quo Is Rigged

One has to wonder why we are dodging this truth about what we've become: a nation that turns a blind eye to skimmers, scammers and legal looting.

As in the story of the Emperor's new clothes, the onlooker who declares the obvious-- in this case, that the stock market is rigged--shatters the consensus lie.In the current saga, author Michael Lewis plays the role of the truth-telling boy, and everyone who went along with the fiction that the Emperor's high-frequency trading finery was resplendent is revealed as credulous, complicit or worse.

The high-frequency trading (HFT) scam is old news, and a number of fine books have addressed the mechanics of the skim, for example Dark Pools: High-Speed Traders, A.I. Bandits, and the Threat to the Global Financial System by Scott Patterson.

Many in the alternative financial media have written about HFT for years. Here are two of my own entries on the topic:

The Stock Market Is an "Attractive Nuisance" and Should Be Closed (August 22, 2012)

Interestingly, Mr. Patterson outlined the solution that the heroes of Lewis' book ended up pursuing. Here is a Q&A I conducted with Patterson in September 2012:

CHS: While there are various regulatory “tweaks” that could be put in place, I wonder if we don’t need a more fundamental “re-set” that asks what role the market should play in finance and the economy inhabited by everyday investors.

Scott: I think there are a lot of people in the industry wondering about whether there needs to be a massive overhaul. But it’s probably not a good idea for that to be imposed on the market by the SEC. The uncertainty would be potentially destabilizing. And I just don’t see it happening.
I think the change needs to come from within the market and needs to be imposed by its most important users--I mean, not the high-frequency traders, who are running the show at the exchanges in many ways--but the institutions, the giant mutual fund companies, the pension funds, the long-short hedge funds. They need to exert pressure on the exchanges to stop giving advantages to high-frequency firms.

If we pull back from the media frenzy about HFT, we find the market is rigged in many other ways. The Federal Reserve's policies, stripped of Orwellian mumbo-jumbo, are all about rigging the market to go in one direction--up.

Consider this chart, courtesy of long-time contributor Harun I., of the Dow Jones Industrial Average: I call it the tale of Two Dows. In the Great Bull Market of 1982 - 2000, a market fueled by an extraordinary economic expansion, the DJIA gained an average of 610 points a year.

In the anemic "recovery" of 2009 - 2013, the DJIA gained an average of 2,500 points per year. While the Fed rigged the 1990s Bull Market with low interest rates and other policies, it pulled out all the stops in the last five years: 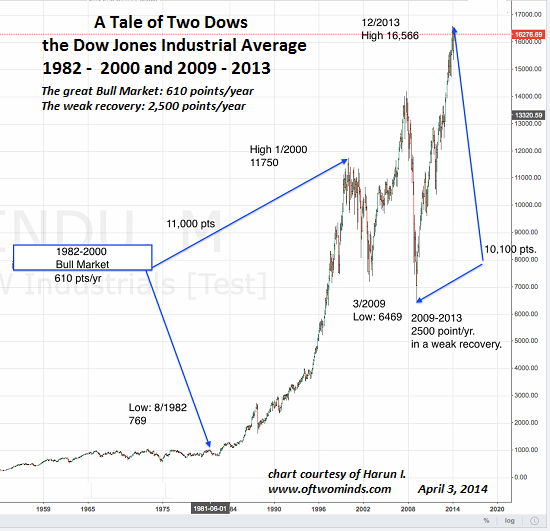 The stock market is only the tip of the iceberg of what's being rigged. For a taste of what's rigged, ask yourself this question: if Mr. Elite Insider perpetrates a scam, and Mr. John Q. Citizen breaks similar laws, is there any difference between the treatment each receives?

Let's go even deeper and ask: why is looting legal, even though it is obviously crooked? Why is high-frequency trading legal? Why is it legal for the Fed to offer money at 0% to its buddies but not to Mr. John Q. Citizen?

Why is it legal to issue student loans to future debt-serfs that is unlike all other debt in that it cannot be discharged in bankruptcy?

Since the legal looting continues unabated regardless of what party or toady is in office, then what actual difference is there between the Demopublicans and Republicrats?

It's not just the stock market that's rigged--the entire Status Quo is rigged. There are two sets of laws and two sets of opportunities: one for those holding the concentrated wealth and power, and the other for the rest of us debt-serfs.

If the system isn't rigged, then why are insolvent banks and bankers protected from the creative destruction of capitalism that befalls John Q. Citizen when his risky bets go bad? Why do we as a nation keep insisting the Emperor's new clothes are splendid when he is in fact parading around buck-naked?

One has to wonder why we are dodging this truth about what we've become: a nation that turns a blind eye to skimmers, scammers and legal looting. Perhaps, in Joseph Conrad's phrase, we hope to escape the grim shadow of self-knowledge. Here is the passage from Chapter 7 of Lord Jim:

I gave no sign of dissent. I had no intention, for the sake of barren truth, to rob him of the smallest particle of any saving grace that would come in his way. I didn't know how much of it he believed himself. I didn't know what he was playing up to--if he was playing up to anything at all--and I suspect he did not know either; for it is my belief no man ever understands quite his own artful dodges to escape from the grim shadow of self-knowledge.

Pay Our Pensions Or We'll Throw You in Jail: the Legalization of Looting (March 19, 2014)