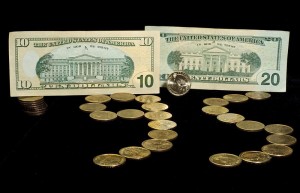 ﻿Is America really "the land of the free"?  Most people think of money as simply a medium of exchange that makes economic transactions more convenient, but the truth is that it is much more than that.  Money is also a form of social control.  Just think about it.  What did you do this morning?  Well, if you are like most Americans, you either got up and went to work (to make money) or to school (to learn the skills that you will need to make money).  We spend a great deal of our lives pursuing the almighty dollar, and there are literally millions of laws, rules and regulations about how we earn our money, about how we spend our money and about how much of our money the government gets to take from us.  Not that money is a bad thing in itself.  Without money, it would be really hard to have a modern society.  Unfortunately, our money is based on debt, and debt levels in the United States have exploded to absolutely unprecedented levels in recent years.  The borrower is the servant of the lender, and if you are like most Americans, nearly every major purchase that you make in your life is going to involve debt.  Do you want to get a college education so that you can get a "good job"?  You are told to get a student loan.  Do you want a car?  You are encouraged to get an auto loan and to stretch out the payments for as long as possible.  Do you want a home?  You are probably going to end up with a big fat mortgage.  And of course I could go on and on and on.  The cold, hard truth of the matter is that most Americans are debt slaves.  Most of us spend our entire lives trapped in an endless cycle of debt that we never escape until we die, and meanwhile our years of hard labor are greatly enriching those that own our debts.

Have you ever found yourself wondering why you can never seem to get ahead financially no matter how hard you work?

Well, it is probably because you have gotten yourself enslaved to debt.

On the debt side of things, how much does your credit card company earn if you carry just an average of a $5,000 credit card balance, paying, say, 22% annual interest rate (compounding monthly) for the next 10 years?

In your mind you owe a balance of only $5,000, which is not a huge amount, especially for someone gainfully employed.  After all, $5,000 is just a quick Disney trip, or a moderately priced ski-trip, or that week in Hawaii.  You think to yourself, “how bad could it be?”

The answer, including the cost of monthly compounding, is $44,235, or about 9 times what it appears to cost you at face value.

But a large percentage of Americans never pay off their credit cards at all.  They make small payments each month, but then they just keep on adding to their balances.

In the end, that is financial suicide.

If you carry an "average balance" on your credit cards each month, and those credit cards have an "average" interest rate, you could end up paying millions of dollars to the credit card companies by the end of your life...

Let’s say you are an average American household, and you carry an average balance of $15,956 in credit card debt.

Also, as an average American household, let’s assume you pay an average current rate of 12.83%.

Finally, let’s assume you carry this average balance for 40 years, between ages 25 and 65.  How much did your credit card company make off of you and your extreme averageness?

Sadly, approximately 46% of all Americans carry a credit card balance from month to month.

How stupid can we be as a nation?

When you become enslaved to the credit card companies, your toil and sweat makes them much wealthier.  It is a form of slavery that does not require anyone pointing a gun at you.