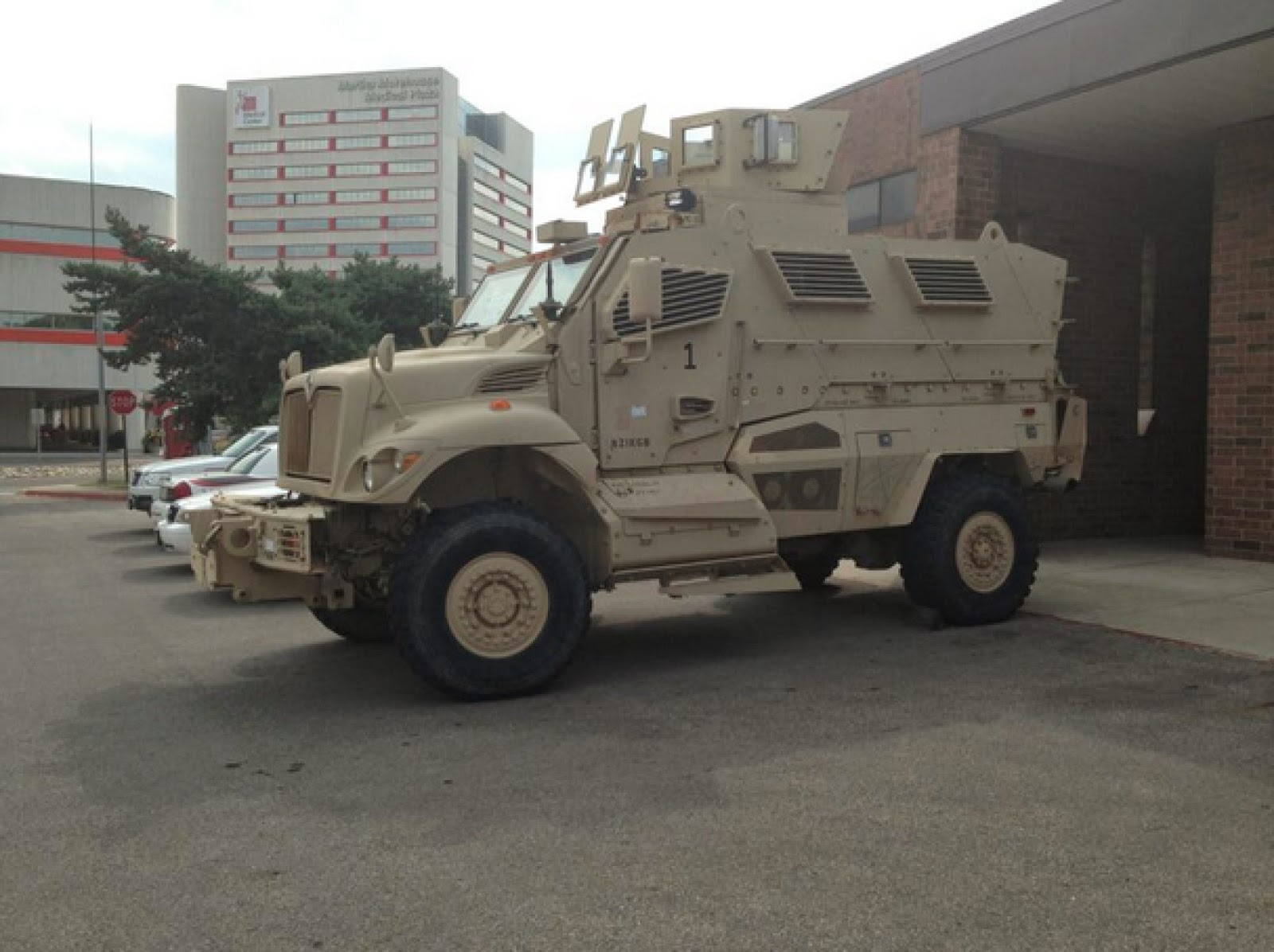 Almost 13,000 agencies in all 50 states and four U.S. territories participate in the military “recycling” program, and the share of equipment and weaponry gifted each year continues to expand. In 2011, $500 million worth of military equipment was distributed to law enforcement agencies throughout the country. That number jumped to $546 million in 2012.

Since 1990, $4.2 billion worth of equipment has been transferred from the Defense Department to domestic police agencies through the 1033 program, in addition to various other programs supposedly aimed at fighting the so-called War on Drugs and War on Terror. For example, the Department of Homeland Security has delivered roughly $34 billion to police departments & colleges.

Since 2006, through the 1033 program, the Pentagon has distributed:

Last year in Columbia, Mo., its police force, which handles much of the security at the University of Missouri, picked up its own $200,000, ground-pounding behemoth. The vehicle is called a “Bearcat” which is an acronym for “Ballistic Engineered Armored Response Counter Attack Truck.”

A recent Freedom of Information Act request by MuckRock, a data aggregating website, found more than 100 college campuses with police departments have received goodies from the Pentagon.

It’s doled out for free through the Defense Department’s 1033 program, which distributes complimentary items to city and county municipalities and police departments as well.

The 1033 program — called 1208 before Congress revised it in 1996 — was etched out of the National Defense Authorization Act, which was, itself, a piece of legislation passed in 1996 for the purposes of arming police departments in large terrorist-centric cities with military weapons.

Not all of the equipment is weaponry. For example, along with BearCats, rifles and MRAPs, the Defense Department has also given popcorn machines, meat slicers, bouncy castles (for the kids, you know), and Xbox games, Reason reports.

The list of 1033 Defense Department hand outs does not detail what agency got what. The data only shows, in general terms, the state where military-grade equipment was sent.

Take, for example, one of the smallest universities to receive items from the DOD: Lincoln University, a small college located in Missouri’s state Capitol, Jefferson City. Lincoln boasts a student and faculty population of just over 3,000, yet it is the only university in Missouri currently receiving DOD equipment directly.

The Lincoln University Police Department refused to comment to The College Fix on the kind of military-gear the department received from the DOD’s program.

The following story from NPR is a typical response from police depts. acquiring military equipment:
The Pentagon gave John Thomas, sheriff of Page County, Va., a gigantic MRAP — meant to withstand roadside bombs in Iraq — in May.
As he drives through the Shenandoah Valley, Thomas says he did give some thought to getting one. "When we looked at acquiring the MRAP, I looked very strongly at the public — political opinions and the political climate," he says.
Thomas says he knew some might question why Page County needed an MRAP. "And I knew that there was a lot of anti-use of military equipment by police forces. But what most people don't understand is that an MRAP is nothing but a truck with a big bulletproof box on it. There is no offensive — the ones that we get — there is no offensive capability."
A tag on the front of the 39,000-pound MRAP says the vehicle is worth $733,000 — but all Page County had to pay was the cost of shipping it from a refurbishing plant in Texas. Thomas says for this rural county's 25,000 inhabitants, it was a good deal.
"Is it overkill? Yeah, it is. I mean, for our use, it's more armor than we need. But it's free," he said.

Rep. Hank Johnson (D-Ga.), who plans to introduce legislation to end the Defense Department’s 1033 program, has cited the growing trend of giving military equipment to campus police as well as police departments as part of his motivation.

But college police departments argue the program is a vital resource to help ensure campus safety.

Florida International Police Chief Alexander Casas, asked about their procurement of military-grade rifles, told Politico that his officers “know well the difference between our role as law enforcement for our university community and the role of the military. This equipment allows us to be better prepared to respond to a variety of critical incidents, from active shooter incidents to disaster recovery.”

And Florida State’s Humvee was cited with helping the clean-up effort after a sever campus flood. Maryland campus officials told The Sun the M16s are for “training purposes.” The University of Maryland has also had several student riots after athletic games.

“Schools and police officials will cite Virginia Tech or Columbine as reason for needing SWAT teams or armored vehicles, but the average campus can expect to see a homicide once every several thousand years,” Radley Balko told The College Fix last year.
https://www.thecollegefix.com/post/19075/
https://www.npr.org/2014/09/02/342494225/mraps-and-bayonets-what-we-know-about-the-pentagons-1033-program