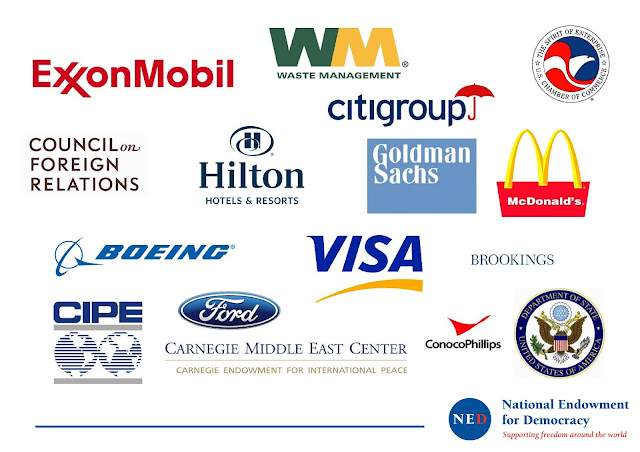 Image: A visual representation of the corporate-financier interests represented on the National Endowment for Democracy's (NED) board of directors. NDItech falls under the umbrella of NED. While NED and NDItech pose as fighting for "democracy," their corporate-financier interests lie poorly disguised just beneath the surface. Surely Goldman Sachs, Exxon, and the SOPA-sponsoring US Chamber of Commerce don't care about democracy or freedom - on the Internet or elsewhere.

The National Democratic Institute (NDI) is one of many tentacles descending from the US State Department and its National Endowment for Democracy (NED) front. Despite NED and NDI's lofty mission statements about "promoting democracy worldwide," the interests they represent are clearly those of the Fortune 500, including big-oil, retail, media, banking, and defense. This convergence of corporate-financier interests pervade the US government from the top, via corporate-funded policy think tanks that direct US policy at home and abroad, and out the bottom through corporate-chaired and funded NGOs that oversee the execution of this policy.

Does Boeing, Goldman Sachs, Exxon, and the SOPA, ACTA, CISPA-sponsoring US Chamber of Commerce care about promoting democracy abroad? Or in expanding their corporate-financier interests under the guise of promoting democracy? Clearly the latter.

Other directors include Francis Fukuyama, Zalmay Khalilzad, Will Marshall, and Vin Weber - all certified warmongers and signatories of pro-war papers imploring the US to invade and expand its military presence in Iraq, Afghanistan, Iran, Libya, and now Syria.

The NED's game is growing old, and many nations not only recognize the threat these insidious organizations pose through their stable of NGOs, but have now devised effective strategies to expose and purge them from within their borders. Russia has led the way, forcing NGOs to reveal openly their funding, and thus compromising their perceived legitimacy and neutrality - a major problem for NED-funded fronts who attempt to portray themselves as "independent," as election-monitor GOLOS attempted to do before Russian elections in 2011.

mage: A screenshot from NED's official website, listing GOLOS as a recipient of NED funding, which in turn is provided by the US State Department. Despite this overt conflict of interest - especially with NED subsidiary International Republican Institute chairman John McCain openly threatening Russia with "Arab Spring" unrest, "journalists" and GOLOS itself continue using the term "independent" election monitors. (click image to enlarge)

Thailand's NED-funded front, Prachatai, also deceived its readers regarding the nature of its funding, and still to this day claims to be "independent" despite finally revealing substantial aid from foreign governments, including NED.

However, now, these interests are trying a new trick - co-opting the planet's tech community, both to augment its current activities, and to blunt the devastating blow the tech community has so far dealt big-business special interests.

NED's NDI has spun off NDItech DemocracyWorks which seeks to leverage emerging technology to manipulate and undermine targeted nations, just as NED has done through NGOs for years. NDItech's website states:

The NDItech DemocracyWorks blog provides a platform for NDI to engage in ongoing conversations about the important and increasing role technology plays in politics and democratic development. The blog is managed by NDI's ICT (information and communication technology) team.

NDI provides technical assistance to our democracy partners around the world including political parties, legislatures, civic groups, other organizations and individuals in more than 70 countries. Our programs help these groups strengthen democratic institutions, safeguard elections, advance citizen engagement, and promote open and accountable government in their countries. The ICT team assists NDI partners and staff members around the world integrate technology tools into our democracy assistance programs in innovative and sustainable ways.

The software engineer will develop and maintain software applications for NDI democracy programs around the world and for internal business applications. The ideal candidate is versatile and likes to work in a very dynamic environment on several projects in parallel. This position requires an engineer who is passionate about new technologies, who keeps current with software development trends, and who has the ability to not only code but also advise NDI staff and partners on using technology to meet objectives and to solve problems.

NDItech will in essence, be developing technology to bolster the many fake revolutions and armed violence the US State Department is busy orchestrating on behalf of the corporate-financier interests that direct US policy and both fund and chair NED, NDI, and now NDItech.


Most ironically, when it was pointed out to NDItech that they were attempting to co-opt Internet activist Aaron Swartz' work to help the very interests he fought against, they replied by stating:

"Not sure what you’re talking about. We’re strongly opposed to all those pieces of legislation and some of us knew Aaron." 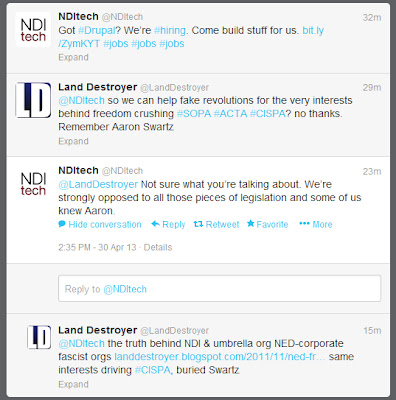 There is no more influential business lobby group in the world than the U.S. Chamber of Commerce, which boasts that its "core purpose is to fight for free enterprise" and "individual freedom."

Which is why the Chamber's unflagging--even unyielding--support of a controversial copyright bill loathed by Silicon Valley might come as something of a surprise. Not only do critics view the Stop Online Piracy Act as antithetical to the individual freedom the Chamber applauds, but the technology industry has contributed more to economic growth and free enterprise in the last decade than Hollywood has.

Yet the Chamber has been even more aggressive than the Motion Picture Association of America and the Recording Industry Association of America in defending SOPA and attacking the legislation's critics. SOPA would allow the Justice Department to seek a court order to be served on search engines, Internet providers, and other companies that would force them to make a suspected piratical Web site effectively vanish from the Internet.

While CNET attempts to break down the Chamber's support for SOPA into a left/right, Democrat vs. Republican issue, the reality is that the corporate-financier interests represented by the Chamber, drive the policy of both sides of the aisle - which is why a Neo-Con chaired NED directly funds both the National Democratic Institute, which is indeed affiliated with the Democrat Party, and the International Republican Institute.

Additionally, the NDI itself lists the Center for International Private Enterprise (CIPE), a joint project of the US Chamber of Commerce and NED, as one of its "American Partners." It states:

CIPE's board of directors consists almost entirely of US Chamber of Commerce members, including:

Also on CIPE's board of directors is Peter M. Cleveland, Vice President of Legal and Corporate Affairs and Global Policy of Intel. Cleveland literally wrote a letter to Congress in support of CISPA, SOPA's successor. Cleveland wrote specifically:

On behalf of Intel Corporation, as well as our subsidiary McAfee, I am writing to offer our support for the "Cyber Intelligence Sharing and Protection Act of 2011." We believe the policy changes and legal protections implemented by the bill represent meaningful improvements in the important area of information sharing for cybersecurity purposes. 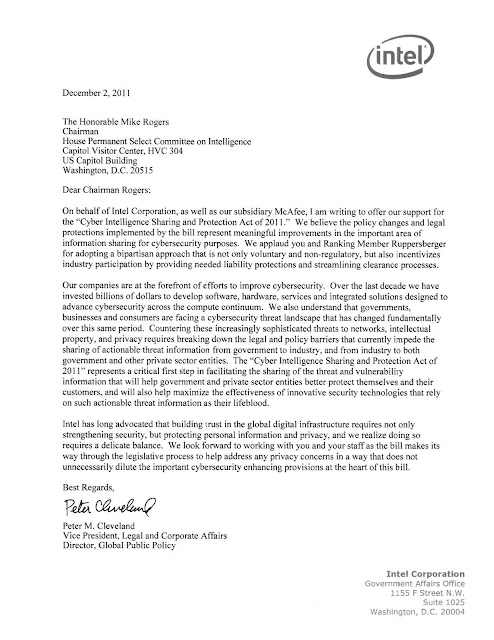 Of course, then, NDItech "knew Aaron," because he was the man fighting directly against NDItech and the very people they work for. CIPE is listed as one of NDI's "American Partners" and is funded right alongside NDI by their umbrella group, NED. These are the very people involved in the revolving doors between big-business and big-government that got SOPA, ACTA, and CISPA as far as they did, and are the same people who will continue fighting against Internet freedom well into the foreseeable future.

The arrogance of NDItech, and other fronts like them, is that they believe the tech community is as easily led as the many willing but perhaps unwitting activists they dupe into working for their crypto-corporate NGOs worldwide. They apparently do not believe those across the tech community possess the ability to do some simple background checking into NDItech and who they are affiliated with, and realize the fox is attempting to guard the hen house.

NDI's shady partnership with CIPE aside, NDI itself hosts a myriad of compromised interests tied directly to big-business. Some select members include:

Again, big-oil, big-banking, and big-defense. These are, without a doubt, the very people Aaron Swartz was resisting. These are the very interests across big business, that championed for SOPA (.pdf), ACTA, and CISPA.  NDI is directly affiliated with people who literally and very openly championed for SOPA, ACTA, and CISPA. Their boldfaced lies claiming they were " strongly opposed to all those pieces of legislation" says much about how they view the intelligence of tech community they seek to compromise, co-opt, and employ to promote the very sort of encroachments on our civil liberties many in the tech community are fighting against.

Don't Work for NDItech, Work for Yourself and Your Community

It is the greatest victory for them to take enemies like Aaron Swartz and those who supported his activism, and turn them into tools for special interests. It is our greatest victory when we expose them, ostracize them, boycott the special-interests that subsidize their insidious work, and replace them permanently with local alternatives.

Got Drupal? We're hiring. Come build stuff for us.

Learn the tricks they use to co-opt talented, well-intentioned, intelligent young people, and take a look across the rest of the tech landscape to see who else is playing a similar game. There is nothing they can offer or provide for you, that you and your community cannot do yourselves better, more honestly, and truly for your own best interests. ﻿