Terrorism is Largely US Imperialism’s Own Creation 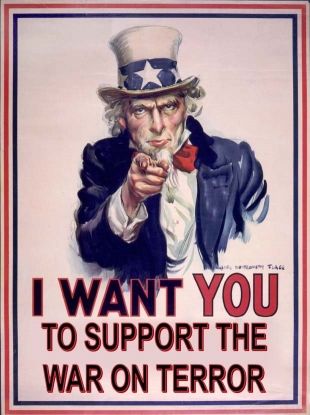 The US is less safe against a ubiquitous threat from global terrorism today than it was even one or two years ago, according to those who chair Congress’s intelligence committees.

Diane Feinstein, a California Democrat who heads the Senate panel, and Mike Rogers, a Michigan Republican who chairs the committee in the House, strongly concurred on this question during a television interview on CNN’s “State of the Union” program last Sunday.

CNN’s Candy Crowley asked Feinstein, “Are we safer now than we were a year ago, two years ago?”

Feinstein responded: “I don’t think so. I think terror is up worldwide, the statistics indicate that, the fatalities are way up.” She added that there were “more groups than ever and there’s huge malevolence out there.”

Rogers enthusiastically concurred: “Oh, I absolutely agree that we’re not safer today for the same reasons.”

With the US now spending twice as much on its intelligence apparatus as it did in 2001—we now know, thanks to the revelations of former National Security Agency contractor Edward Snowden, that the “black budget” for these agencies topped $56 billion for 2013—such an assessment raises obvious questions.

Are the two intelligence chairmen lying? Are these vast sums being spent for purposes other than safeguarding the American people against terrorism? The answer to both questions is yes.

The claims about the number of terror attacks and fatalities being “up worldwide” constitute a deliberate and cynical distortion.

In point of fact, for 2012, the total number of terror fatalities in the US was nine. Six of these were inflicted by one neo-Nazi gunman who mowed down worshipers at a Sikh temple in Wisconsin, hardly the focus of the US “war on terror.” None was caused by Al Qaeda-linked or inspired suspects.

During the same year, a grand total of nine alleged terror plots were reported, half as many as the year before. Virtually all of them involved undercover FBI agents provocateurs who ensnared unwitting Muslim-Americans in “sting” operations.

So what are the scare statistics invoked by Feinstein and Rogers? They are drawn overwhelmingly from a handful of countries where the US has engaged in neocolonial wars and occupations. Just four countries—Afghanistan, Iraq, Pakistan and Syria—accounted for well over 70 percent of terror-related deaths in 2012, according to the US State Department’s own figures.

In Afghanistan and Pakistan, the targets of the Obama administration’s so-called AfPak War, the so-called terrorist attacks have taken place in the context of resistance to US occupation and continuous US drone assassinations and massacres. In Iraq, they are the result of a sectarian bloodletting that is the legacy of the US invasion and toppling of the country’s secular regime.

It was Syria that saw the sharpest growth in the number of attacks and by far the largest number of dead and wounded per attack. Here, as in Libya before it, terrorism has been a preferred weapon in a US-backed war for regime change in which Al Qaeda-linked Islamist fighters have served as Washington’s main proxy force on the ground.

So, on a global scale, terrorism is largely US imperialism’s own creation—either through directly fomenting it as in Libya and Syria or provoking it through imperialist invasions and drone killings. While thousands have paid the price for these policies, they have for over a decade not been in any significant numbers in the US itself.

Of course none of these points were even hinted at by the CNN’s Crowley, who, like the rest of the media, served merely to facilitate and amplify the terror fear-mongering of the two officials.

It was Rogers who first touched on the main point of this attempt to breathe new life into the terror scare. “We’re fighting amongst ourselves here in this country about the role of our intelligence community that is having an impact on our ability to stop what is a growing number of threats,” said the Republican congressman. “And so we’ve got to shake ourselves out of this pretty soon and understand that our intelligence services are not the bad guys.”

While the name Edward Snowden did not cross the lips of Crowley, Feinstein or Rogers, it quickly became clear that his revelations of criminal domestic and international surveillance were not only the subtext of the interview, but its principal motivation.

Crowley turned sympathetically to the two legislators and stated: “It seems to me … both of you are saying you haven’t liked this focus on the NSA and the complaints about the NSA in terms of the breadth of what they’re collecting.”

Rogers responded by lamenting the “thousands of man hours” spent in answering the continuing revelations. He insisted that both his and Feinstein’s intelligence committees “take great pride in our real oversight function … to make sure they’re not violating the law.”

He concluded by warning that “all of that work over and over again every time there’s a disclosure” was taking the US intelligence apparatus “away from their focus, which is, what is Al Qaeda’s next event?”

Even lying should make some sense. Snowden’s revelations have clearly established that the congressional committees utterly failed to prevent the NSA and other intelligence agencies from violating the law and abrogating core democratic and constitutional rights. Just as with torture and the other crimes of the Bush administration, they have acted as co-conspirators of the US military and intelligence apparatus, working to conceal these crimes from the American people.

Those like Feinstein and Rogers represent not the American people, but rather the military and the spy agencies that form the core of the American state. Their loyalty is assured not only by ideology, but by definite material interests. It is no accident that the spouses of both legislators have made millions as executives of private security contractors for the US military and the State Department.

These revelations have also made clear that the war on terror is itself a fraud, with the “focus” of these agencies placed not on Al Qaeda, but on the population of the US and the entire planet.

The interview aired just days before the latest revelation that the NSA has been collecting roughly 5 billion records each and every day in order to track the minute-by-minute movements of hundreds of millions of cellphone users around the world, including in the US itself.

This follows the release of multiple documents showing that the agency has spied on the populations and governments of Europe, South America and Southeast Asia, going so far as to tap the office and personal phones of heads of state such as German Chancellor Angela Merkel and Brazilian President Dilma Rousseff. Other material has been made public making it clear that the NSA is engaged in extensive industrial espionage, targeting the Brazilian oil giant Petrobras and other international firms.

Neither Feinstein nor Rogers could even attempt to argue that such activities are part of the NSA’s “focus” on Al Qaeda. It is obvious that they are rather part and parcel of the aggressive drive by US imperialism to offset its economic decline with ever greater reliance on the might of its military and intelligence complex.

The US political system, based on the rule of a thin layer of corporate and financial oligarchs exercised through two capitalist parties and against the interests of working people, the vast majority of the population, cannot tolerate the defense of democratic rights or the exposure of the crimes of the state.

The warning by Rogers that Americans must stop “fighting amongst ourselves” over the massive domestic and international spying operations or, implicitly, face another Al Qaeda attack, must be taken as a threat.

It is well established that virtually every terrorist attack or supposedly foiled plot to take place on US soil, including that of September 11, 2001, has been carried out by individuals who were either acting under the direction of US agents or under their surveillance. The massive US intelligence apparatus clearly has the means to engineer or facilitate another terrorist provocation with the aim of silencing the exposure of its crimes.