The CIA's War On Human Consciousness 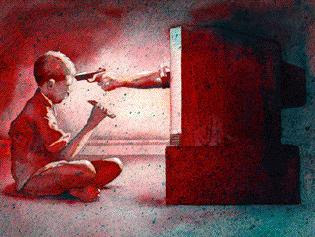 The T.V. Kills Your Brain With The CIA's Mass Mind Control Gun.

"From 1950 to 1962, the C.I.A. ran a massive research project, a veritable Manhattan Project of the mind, spending over $1 billion a year to crack the code of human consciousness, from both mass persuasion and the use of coercion in individual interrogation." - Professor Alfred McCoy, author of "A Question of Torture: CIA Interrogation, from the Cold War to the War on Terror." This quote is from Prof. McCoy's interview with Democracy Now on February 17, 2006.

"Our brain is domineering when it comes to coping with reality. We sometimes see things not as they really are, sometimes invent categories that do not exist and sometimes fail to see things that are really there. There are people who have never seen or heard of an aircraft and will not be able to imagine it and a real airplane overhead will be distorted in their minds, creating alternative realities.

To recognize that what we call reality is only a consensus reality (only what we have agreed to call reality) is to recognize that we can perceive only what we can conceive. Captain Cook's ship was invisible to the Tahitians because they could not conceive of such a vessel. Joseph Pearce explains this best: "Man's mind mirrors a universe that mirrors man's mind."" - Bharati Sarkar, "Consciousness - Our third eye."

"Remember: those who are at the top of the heap will always take whatever steps are necessary to maintain the status quo. It is obvious that they cannot completely control the propagation of the information. So, how do they "keep secrets?" They don't. Everything is right out there in the public domain. Anybody who wants to can do the research we have done and come to the realizations we have in this process. BUT, not everyone is able to withstand the OTHER weapon of Mass Control: the fear of being labeled a "suspected or potential supporter" in a world where the Grand Inquisitor has total control over life and death." - Laura Knight-Jadczyk, "Mass Mind Control?"

Before the CIA and NSA decided it was a good idea to invade your home without your knowledge to spy on you with advanced appliances, smart phones, computers, and other electronics, they invaded your mind to manipulate your understanding of reality and history, especially of epochal events like the JFK assassination and the 9/11 attacks.

It is disturbing to know that the CIA has been inside the public mind for half a century, and is now using its unthinkable technological capabilities to invade private homes to document and categorize each individual's behavioural patterns, lifestyle choices, information preferences, and daily habits.

Of course, state surveillance spooks cannot track and data-mine every space of information in this vast social ocean that we call the virtual world. But, that problem can be managed because the sharks of the state don't need to be aware of the entire environment to strike fear in the fishes and other creatures. Just the fact that sharks are buzzing around is enough to make any thinking fish freeze and adapt his thoughts, views, opinions, and patterns in order to placate the sharks' appetite for domination and total control.

The thoughtless fishes don't realize that predatory sharks of the totalitarian state are hunting them to trap them in their net of surveillance and eventually kill them. But it isn't their fault that they're not aware of this frightening social environment because the CIA has uses its powerful state and private resources to deny them of this life-sustaining mental awareness. The CIA is conducting a covert war on human consciousness, and the false flag 9/11 attacks was its greatest propaganda victory in this unusual war.

The U.S. National Security State's war on human consciousness includes its suppression of free energy, free thought, and free exchange of ideas. A vast array of human knowledge and human history is kept hidden from the global public by CIA spies in the American and global media.

But the suppression of information and historical reality is just one technique that the CIA has mastered since its murder of the President JFK. Its greatest mind control technique is also the most ancient: fear. Since 9/11, the fear of Islam and of mysterious terrorists has defined the public imagination of America, Israel, and the West.

Prof. Michel Chossudovsky articulated the social and political effects of state-induced fear in his article called, "AL QAEDA AND HUMAN CONSCIOUSNESS: Al Qaeda, Al Qaeda.... An Incessant and Repetitive Public DiscoursePart I." Here is an excerpt from Prof. Chossudovsky's article:

How does the daily bombardment of Al Qaeda related concepts and images, funnelled into the Western news chain and on network TV, affect the human mindset?

Al Qaeda concepts, repeated ad nauseam have potentially traumatic impacts on the human mind and the ability of normal human beings to analyze and comprehend the "real outside World" of war, politics and the economic crisis.

What is at stake is human consciousness and comprehension based on concepts and facts.

With Al Qaeda, however, there are no verifiable "facts" and "concepts", because Al Qaeda has evolved into a media mythology, a legend, an invented ideological construct, used as an unsubtle tool of media disinformation and war propaganda.

Al Qaeda constitutes a stylized, fake and almost folkloric abstraction of terrorism, which permeates the inner consciousness of millions of people around the World.

Reference to Al Qaeda has become a dogma, a belief, which most people espouse unconditionally.

Is this political indoctrination? Is it brain-washing? If so what is the underlying objective?

People's capacity to independently analyse World events, as well as address causal relationships pertaining to politics and society, is significantly impaired. That is the objective!

The routine use of Al Qaeda to generate blanket explanations of complex political events is meant to create confusion. It prevents people from thinking."

Chossudovsky's most important point is that human consciousness is at stake. The CIA, Mossad, MI6, and other intelligence agencies around the world that have successfully invaded the global public mind through covert information and psychological operations are waging a war on the human mind. They are enemies of humanity, and enemies of human evolution.

Thus, for humanity to evolve and prosper, the CIA, MI6, and Mossad must be brought to justice. Also, the media companies that are cooperating with these agencies to suppress the truth about 9/11 and other evil events must also be brought to justice. They are suppressing information that will enlighten and awaken the people of the Western world to regain their rightful power over their governments.

These evil intelligence agencies and media companies are holding back humanity by brainwashing the global public with fear and lies. The education and enlightenment of all members of the planet is necessary not just for the prosperity of the species, but for its very survival.

There are informed people around the world who believe that the world is on the verge of a nuclear world war, which will be triggered by an American-Israeli attack on Iran within the next 12 months.

If such a tragic outcome comes to pass, we'll know who to blame: the CIA, Mossad, MI6, the banksters's military-industrial complex, and the global mainstream media that has systematically suppressed the truth about the 9/11 attacks and the real reasons for the Global War on Terrorism.