The Trans-Pacific Partnership (TPP), An Oppressive US-Led Free Trade Agreement, A Corporate Power-Tool of the 1% 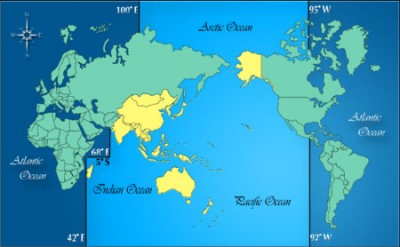 One of the least discussed and least reported issues is the Obama administration’s effort to bring the Trans-Pacific Partnership agreement to the forefront, an oppressive plurilateral US-led free trade agreement currently being negotiated with several Pacific Rim countries.

Six hundred US corporate advisors have negotiated and had input into the TPP, and the proposed draft text has not been made available to the public, the press or policymakers. The level of secrecy surrounding the agreements is unparalleled – paramilitary teams scatter outside the premise of each round of discussions while helicopters loom overhead – media outlets impose a near-total blackout of reportage on the subject and US Senator Ron Wyden, the Chair of the Congressional Committee with jurisdiction over TPP, was denied access to the negotiation texts. “The majority of Congress is being kept in the dark as to the substance of the TPP negotiations, while representatives of U.S. corporations — like Halliburton, Chevron, PhaRMA, Comcast and the Motion Picture Association of America — are being consulted and made privy to details of the agreement,” said Wyden, in a floor statement to Congress.

In addition to the United States, the countries participating in the negotiations include Australia, Brunei, Chile, Canada, Malaysia, Mexico, New Zealand, Peru, Singapore, and Vietnam. Japan has expressed its desire to become a negotiating partner, but not yet joined negotiation, partly due to public pressure to steer-clear. The TPP would impose punishing regulations that give multinational corporations unprecedented rights to demand taxpayer compensation for policies they think will undermine their expected future profits straight from the treasuries of participating nations – it would push the agenda of Big PhaRMA in the developing world to impose longer monopoly controls on drugs, drastically limiting access to affordable generic medications that people depend on. The TPP would undermine food safety by limiting labeling and forcing countries like the United States to import food that fails to meet its national safety standards, in addition to banning Buy America or Buy Local preferences. 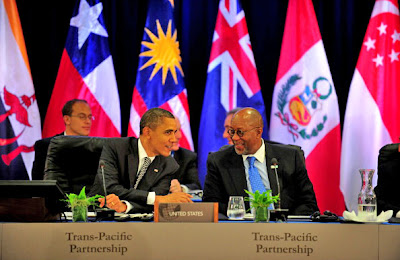 According to leaked draft texts, the TPP would also impose investor protections that incentivize offshoring jobs through special benefits for companies – the TPP stifles innovation by requiring internet service providers to police user-activity and treat small-scale individual downloads as large-scale for-profit violators. Most predictably, it would rollback regulation of finance capital predators on Wall Street by prohibiting bans on risky financial services and preventing signatory nations from exercising the ability to independently pursue monetary policy and issue capital controls – signatories must permit the free flow of derivatives, currency speculation and other manipulative financial instruments. The US-led partnership – which seeks to impose ‘Shock and Awe’ Globalization – aims to abolish the accountability of multinational corporations to the governments of countries with which they trade by making signatory governments accountable to corporations for costs imposed by national laws and regulations, including health, safety and environmental regulations.

The proposed legislation on Intellectual Property will have enormous ramifications for TPP signatories, including Internet termination for households, businesses, and organizations as an accepted penalty for copyright infringement. Signatory nations would essentially submit themselves to oppressive IP restrictions designed by Hollywood’s copyright cartels, severely limiting their ability to digitally exchange information on sites like YouTube, where streaming videos are considered copyrightable. “Broader copyright and intellectual property rights demands by the US would lock up the Internet, stifle research and increase education costs, by extending existing generous copyright from 70 years to 120 years, and even making it a criminal offense to temporarily store files on a computer without authorization. The US, as a net exporter of digital information, would be the only party to benefit from this,” said Patricia Ranald, convener of the Australian Fair Trade and Investment Network.

In the private investor-state that the TPP is attempting to establish, foreign corporations can sue national governments, submitting signatory countries to the jurisdiction of investor arbitral tribunals, staffed by private sector attorneys. International tribunals could have authority to order governments to pay unlimited cash compensation out of national treasuries to foreign corporations and investors if new or existing government policy hinders investors’ expected future profits. The domestic taxpayer in each signatory country must shoulder any compensation paid to private investors and foreign corporations, in addition to large hourly fees for tribunals and legal costs. A good example of how this agreement neuters national sovereignty comes from Malaysia, which was able to recover from the 1997 Asian Financial Crisis more quickly than its neighbors by introducing a series of capital control measures on the Malaysian ringgit to prevent external speculation – the TPP’s proposed measures would restrict signatory nations from exercising capital controls to prevent and mitigate financial crises and promote financial stability. 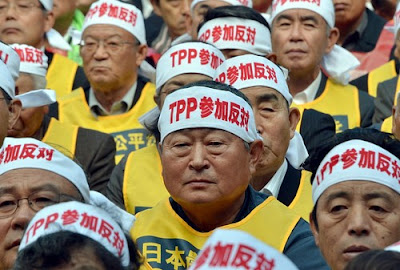 The TPP regime ensures that foreign investors and multinational corporations retain full rights to undermine the sovereignty of participatory nations by skirting domestic regulations and limiting the abilities of national governments to issue independent economic policy. There has never been such a sweeping corporate assault on sovereignty, and that includes US sovereignty. Leaked TPP documents detail how the Obama administration intends to surrender US sovereignty to international tribunals that operate under World Bank and UN rules to settle disputes arising under the TPP, specifically designed to leave Congress out in the cold while creating a judicial authority higher than the US Supreme Court. In theory, the TPP would give international judicial entities the authority to override US laws, allowing foreign companies doing business in the United States the privilege of operating in a legal environment that would give them significant economic advantages over American companies that remain tied to US laws, placing domestic companies who do not move offshore at a competitive disadvantage.

Facing the emergence of strong developing economies like the BRICS group and other nations that seek greater access to industrial growth and development, the Obama administration realizes that it must offer Pacific nations – who would otherwise have greater incentives in deepening economic ties with China – an attractive stake in the US economy. As the Pentagon repositions its military muscle to the Asia-Pacific region, the TPP is clearly the economic arm of the ‘Asia Pivot’ policy, roping strategic economies into a legally binding corporate-governance regime, lured in by the promise of unfettered access to US markets. The Obama administration is essentially prostituting the American consumer to foreign corporations to usher in a deal that would impose one-size-fits all international rules that even limit the US government’s right to regulate foreign investment and the appropriation of natural resources, solidifying a long-discussed model of finance capital-backed global governance.

Of the 26 chapters of the proposed TPP draft text, it is reported that only two chapters cover trade issues, related to slashing tariffs and lifting quotas. The TPP would obligate the federal government to force US states to conform state laws to over a thousand pages of detailed stipulations and constraints unrelated to trade – from land use to intellectual property rights – authorizing the federal authorities to use all possible means to coax states to comply with TPP rules, even by imposing sanctions if they fail to do so. According to leaked documents, US standards for property rights protection would be swept away in favor of international property rights standards, as interpreted by TPP’s unelected international tribunals, giving investors principal control over public land and resources “that are not for the exclusive or predominant use and benefit of the government.” 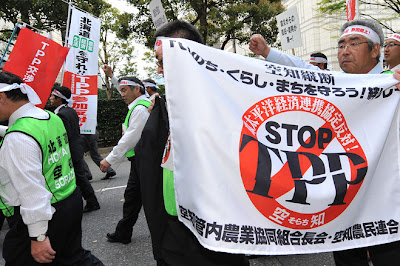 Due to the unconstitutional nature of the TPP, members of Congress would likely object to many of its stipulations – naturally, the Obama administration is employing its executive muscle to restrict congressional authority by operating under “fast-track authority,” a trade provision that requires Congress to review an FTA under limited debate in an accelerated time frame subject to a yes-or-no vote so as to assure foreign partners that the FTA, once signed, will not be changed during the legislative process. No formal steps have been taken to consult Congress as the agreement continues to be negotiated, and Obama looks set to subtly ram the treaty into law. Such is the toxic nature of US policies that seek to bring in disaster-capitalism on a global scale, while keeping those whose lives will be most affected by deal completely in the dark. The message behind this unfettered corporate smash and grab is simple – bend over!

Recent statistics claim that the combined economic output of Brazil, China and India will surpass that of Canada, France, Germany, Italy, the United Kingdom and the United States by 2020. More than 80% of the world’s middle class will live in the South by 2030, and what a different world that would be. The United States is economically ailing, and the TPP – Wall Street’s wet dream and Washington’s answer to its own dwindling economic performance – is designed to allow US big business a greater stake in the emerging Pacific region by imposing an exploitative economic model on signatory nations that exempt multinationals and private investors from any form of public accountability. The TPP’s origins go back to the second Bush administration, and it still remains in the negotiating phases under Obama’s second administration. The overwhelming lack of transparency surrounding the talks lends credence to what is known already – that the contents of this trade agreement serve the interests of those on the top of the economic food chain while the rest of us stagnate on the menu.

Nile Bowie is an independent political analyst and photographer based in Kuala Lumpur, Malaysia. He can be reached at nilebowie@gmail.com