Global Non-Compliance website > Time for Americans to ‘Occupy the Pentagon’

Time for Americans to ‘Occupy the Pentagon’ 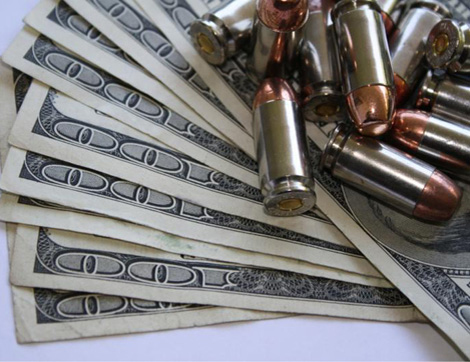 While Americans continue to make their voices heard via the Occupy Wall Street (OWS) movement, maybe they should next focus their attention on an even wealthier, more exploitative crowd: The Pentagon.

The military-industrial-banking complex’s budget breakdown for 2012 is so extraordinary, it’s doubtful that the average person can conceive of such astronomical numbers. The Department of Defense (DoD) is seeking $707.5 billion, the Department of Homeland Security (DHS) wants $46.9 billion, and in a category labeled “Interest on debt incurred in past wars,” the number is between $109.1 billion to $431.5 billion. All this is estimated to be as high as $1.415 trillion for one fiscal year.

An expenditure that might raise the hackles on any OWS protester is known as Foreign Military Financing (FMF), which is predominantly used to pay for arms transfers. Managing of FMF belongs to the Defense Security Cooperation Agency, a part of the DoD. In 2008, the highest FMF requests were for Iraq, Afghanistan and Israel. Each asked for $2.4 billion from the United States to buy weaponry for their own use.

The war in Afghanistan will cost U.S. taxpayers $119.4 billion in 2011, while Iraqi expenditures will run approximately $51.1 billion this year. The United States went into Afghanistan on Oct. 7, 2001, and troops are expected to be leaving by the summer of 2012, making this the longest war in U.S. history. Iraq War II began in March 2003, and President Obama has promised to pull U.S. troops out by the end of 2011.

Israel, the only country in the top tier that hasn’t seen a current war on its soil, is the largest cumulative recipient of U.S. foreign assistance since World War II according to a Congressional Research Service report, dated Sept. 16, 2010. The report also stated, “Strong congressional support for Israel has resulted in Israel receiving benefits not available to other countries.”As an example, it said: “All U.S. foreign assistance earmarked for Israel is delivered in the first 30 days of the fiscal year. Most other recipients normally receive aid in installments.”

Aid to Israel will continue into the future as well, regardless of which political party occupies the White House. The report says that in August 2007, “the Bush administration announced that it would increase U.S.military assistance to Israel by $6 billion over the next decade, and that the Obama administration requested $3 billion in FMF to Israel for the 2011 fiscal year.”

In another example of wasteful spending, the website EndTheLie recently reported, “The Pentagon paid $270 billion from 2007 to 2009 to 91 military contractors that were also involved in civil fraud cases resulting in judgments more than $1 million.”

Perhaps Americans should consider occupying space around the Pentagon to highlight its grotesquely wasteful spending.