We Know What You’re Thinking: Scientists Find a Way to Read Minds

Scientists have used brain scanners to detect and reconstruct the faces that people are thinking of, according to a study accepted for publication this month in the journal NeuroImage.

In the study, scientists hooked participants up to an fMRI brain scanner – which determines activity in different parts of the brain by measuring blood flow – and showed them images of faces. Then, using only the brain scans, the scientists were able to create images of the faces the people were looking at.

“It is mind reading,” said Alan S. Cowen, a graduate student at the University of California Berkeley who co-authored the study with professor Marvin M. Chun from Yale and Brice A. Kuhl from New York University.

‘You can even imagine, way down the road, a witness to a crime might want to come in and reconstruct a suspect’s face.’

- Alan S. Cowen, a graduate student at the University of California Berkeley 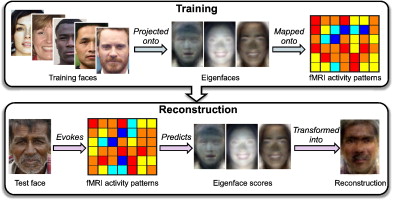 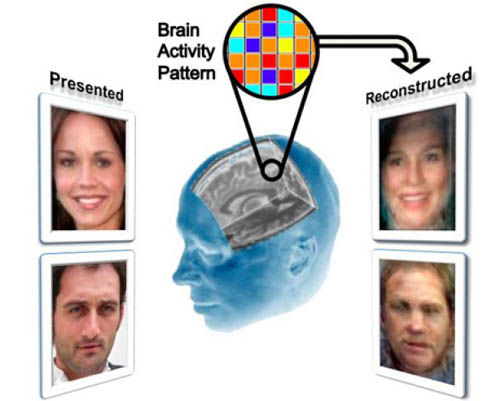 The study says it is the first to try to reconstruct faces from thoughts. The photos above are the actual photos and reconstructions done in the lab.

While the reconstructions based on 30 brain readings are blurry, they approximate the true images. They got the skin color right in all of them, and 24 out of 30 reconstructions correctly detected the presence or absence of a smile.

The brain readings were worse at determining gender and hair color: About two-thirds of the reconstructions clearly detected the gender, and only half got hair color correct.

“There’s definitely room for improvement,” Cowen said, adding that these experiments were conducted two years ago, though they only recently were accepted for publication. He said he and others have been working on improving the process in the interim.

“I’m applying more sophisticated mathematical models [to the brain scan results], so the results should get better,” he said.

Once the technology improves, Cowen said, applications could range from better understanding mental disorders, to recording dreams, to solving crimes.

“You can see how people perceive faces depending on different disorders, like autism – and use that to help diagnose therapies,” he said.

That’s because the reconstructions are based not on the actual image, but on how the image is perceived by a subject’s brain. If an autistic person sees a face differently, the difference will show up in the brain scan reconstruction.

Read the full article at: govtslaves.info

Using electrodes implanted in their brains, one rat was able to pass information to another in a cage thousands of miles away -- albeit without knowing he was doing so.

The experiment, by researchers from Duke University in North Carolina, is the first working example of a "brain-to-brain interface", or a direct communication link between two minds.

Related Articles
There are differences in brain waves between people who recall dreams and those who don’t
Dream contents deciphered by computer
Is ’daydream learning’ possible ?
Scientists create false memories: what part of Matrix is this?
Scientists Demonstrate Innovative Learning Method - Learn "Matrix-Style"
Prison of the Mind: Prisoners could serve 1,000 year sentence in eight hours
Has mankind created a technical world that the mind cannot master or control?
Mind Control: DARPA works on reading brains in real time
Police Can Now Reconstruct Your Face From DNA Evidence
Facebook’s facial recognition software is now as accurate as the human brain
Uploading and Downloading Your Brain - Good Idea?
Stanford neuroscientist: ’We’re now able to eavesdrop on the brain in real life’
Researcher controls colleague’s motions in first human brain-to-brain interface