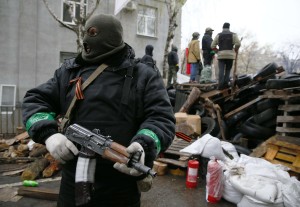 Bloomberg reported in their article, “Russia Faces More Sanctions as Monitors Held in Ukraine,” that:

In Ukraine, pro-Russian militants yesterday captured a bus carrying observers sent by member states of the Organization for Security and Cooperation in Europe, a 57-nation group that includes Russia and the U.S. focusing on conflict prevention and preserving human rights, Ukraine’s Interior Ministry said in a statement on its website. They were holding 13 people hostage in Slovyansk, it said.

The observers — who include four Germans and citizens of the Czech Republic, Denmark, Poland and Sweden — were sent under the Vienna Document on military transparency and included no OSCE monitors, according to the Vienna-based organization. They were accompanied by Ukrainian military officers.

That the team members, all drawn from NATO member states, are not actual OSCE monitors, raises doubts over the legitimacy of their mission. NATO has decisively sided with the unelected regime currently occupying Kiev. The objectivity therefore of  ”monitors” drawn from NATO states presents an immense conflict of interest.

Just as other international organizations, including the United Nations itself, are used by the West as cover for covert extraterritorial operations, it appears that the OSCE Vienna Document on military transparency has been abused in an effort to support Kiev’s unelected regime and its on going armed operations in the east of Ukraine.

While the West attempts to use the capture of these so-called “international monitors” to their rhetorical advantage, the propaganda value is minimal. Had these been real monitors carrying out an objective assessment within the mandate of the Vienna Document on military transparency, the backlash from across the West would have been enormous. It is clear, however, that these “monitors” were most likely using the Vienna Document as cover for a NATO intelligence assessment.

Leading the rather muted propaganda campaign is the US State Department’s Voice of America, which stated in their article, “Captured European Monitors in Ukraine say They are Well,” that:

A group of European monitors detained by pro-Russia insurgents in eastern Ukraine appeared in public Sunday to give assurances they are not being mistreated, even as negotiations began to secure their release.

With armed rebels watching as they spoke, the leader of the monitors from the Organization for Security and Cooperation in Europe, German Colonel Axel Schneider, assured reporters in Slovyansk they were in good health.

Voice of America’s rhetoric, calling NATO officers “European monitors,” strains credibility. Calling anti-fascist eastern Ukrainians “pro-Russia insurgents” also presents a factual discrepancy - an insurgent being defined as “a person who fights against an established government or authority,” and the regime currently occupying Kiev being neither an “established government” nor an “authority.”

One must wonder how the Western media would react had it been Russian military “monitors” captured in Kiev claiming they were operating under the auspices of the OSCE Vienna Document.

Just as the West has done with institutions and organizations like the United Nations in nations like Iraq, Libya, and Syria, their use of the OSCE as cover for military officers belonging to the overtly biased NATO alliance undermines utterly any perceived impartiality or objectivity of the OSCE’s mission in Ukraine, or overall. The abuse of these so-called “international institutions” openly being leveraged by Western special interests endangers any legitimate work taking place within them, thus hindering possible avenues to peacefully resolve the current conflict in Ukraine.

And even as the captured Western officers themselves attempt to defuse tensions regarding their presence in eastern Ukraine and their subsequent capture, the West has mobilized its media machine to further raise tensions and the possibility of a less than peaceful resolution. Reports from Reuters and updates from the US State Department’s Voice of America continue to portray the captured NATO officers as “monitors,” with Reuters in an article titled, “‘Open arms and smile’ fail to protect German colonel in Ukraine,” claiming:

Schneider was featured in a January 28, 2014 article in German newspaper “Aachener Zeitung” about how the German military had raised money for a children’s charity. In his grey dress uniform, a smiling Schneider was pictured handing over a cheque for 2,097.95 euros ($2,900).

The irrelevant side-note is meant to humanize the NATO officers and further demonize their captors. Reuters fails to define just what Schneider and his team were doing in eastern Ukraine, claiming only that they were doing “verification” work. The opacity of the mission and the refusal of the respective governments from which the team’s members are drawn, to explain their presence and objectives in Ukraine, only further adds to suspicions that they were indeed only using the OSCE as cover for a more insidious agenda.

A genuine OSCE monitoring mission to Ukraine, considering the broad membership of the OSCE which includes the Russian Federation, might include members from nations backing not only the unelected regime in Kiev, but also those backing anti-fascist Ukrainians in the eastern and southern regions of the country. That all the team members for the mission originated from NATO countries, many of which have in fact arrayed military assets against both eastern Ukrainians and neighboring Russia in recent weeks, indicates not only an immense conflict of interest, but obvious resulting improprieties.

And while the OSCE does indeed include the Russian Federation within its membership, its “partnership” with NATO appears to take precedence. On the OSCE’s official website, a page describing its partnership with NATO states:

Relations between the OSCE and the North Atlantic Treaty Organization (NATO) have been crucial in developing the security architecture of post-Cold War Europe. Since the beginning of the Helsinki process, NATO has significantly contributed to the debate within the CSCE/OSCE on developing the OSCE Security Model. NATO’s important role in promoting security in Europe is emphasized in a number of OSCE documents, such as the 2003 OSCE Strategy to Address Threats to Security and Stability in the 21st Century.

Of NATO’s military intervention in Kosovo it would claim:

In the field, since the deployment of the OSCE Mission in Kosovo in July 1999, the Mission has developed close links with the NATO-led Kosovo Force (KFOR) which provides a secure environment for the international community in the province. The NATO-led Stabilization Force (SFOR) in Bosnia and Herzegovina and the OSCE Mission to Bosnia and Herzegovina worked closely together to implement the Dayton Peace Agreement.

It would stand to reason that the OSCE’s inclusion of Russia among its membership is a symbolic gesture, and the organization itself is but another appendage of NATO and therefore an extension of its regional and global agenda. It is, if anything, reprising its role as facilitator of NATO vis-à-vis Russia, just as it had done in Kosovo.